It's unusual to say the least, when we go out at night - but then - we were approaching Halloween!

The children are now almost 10,11 and 14 and we genuinely were not sure what to expect. Both Mum and I had been Greyhound racing in the past - but that was pre-children and to be frank, we thought we'd have to wait either until they were a little older or make a night of it on our own sometime - but no - we didn't need to worry at all. 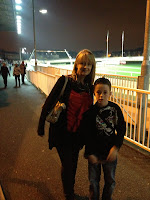 We arrived on Friday night, found parking easily enough (there is lots) and the children got their first glimpse of some "real" greyhounds and the track.

Andrew joked if we had just arrived at the Aviva, fascinated by the floodlights and the buzz around as we collected our Race Card and went through the Turnstiles! We were about to experience Greyhound Racing as a family for the first time! 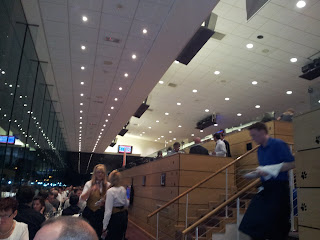 Walking track side, with the viewing stand on our left we noticed several families with children around the same age as ours, and seemed to be regulars, in fact, there is a great sense that down by the track, everyone knows each other. Being early, first race starting at 8.00pm, we went inside to find our table.

On the ground floor there are several outlets where you can choose some food and also a bar, lots of tables and screens - so you don't even need to go outside if you don't want to. There is a Tote there too if you wanted to have a flutter. However, we had opted to eat in the Grandstand Restaurant, overlooking the track on the first floor. 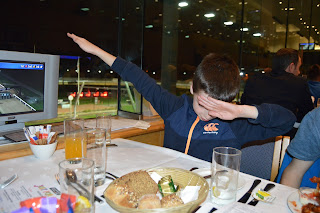 Taking the stairs and we were amazed on arrival at the restaurant. Firstly by the speed at which we found our table but also by the decor and vista we had of the track. We were introduced to our waitress, Claire, who quickly took our orders and explained how it all worked. We opted for starters of chicken wings, followed by a lovely Fillet for Dad and Sirloin for Mum. For the kids there was a great choice, where they could choose Soup or Garlic Bread for starters, followed by either Goujons and Chips or Bangers and Mash - with customary Ice Cream to top it all off! 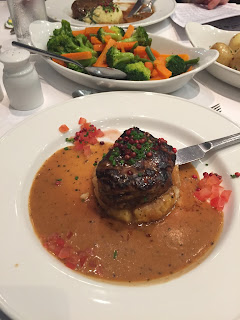 While awaiting our starters to arrive, Dervla, arrived to look after us with Table-Side Tote Betting. She was brilliant - explained how it all worked and was so, so patient. She became "the lady who knows all about the races".

We placed a couple of €1 bets and a competition started between Mum and Dad, that was the first mistake Dad made on the night!!

Dinner arrived just in time for the first race - it really was superb and the children enjoyed eating and watching the races on what felt like a giant TV! Dinner was followed by deserts which the kids literally demolished!!! 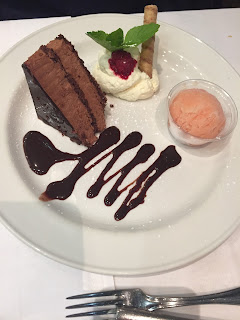 What works really well here, is the visibility and the atmosphere Upstairs, it doesn't really matter where you are sitting you will be able to see what's going on. Once the race gets going the noise is deafening and you can’t help get involved in the cheering for “your” dog – it’s brilliant fun. 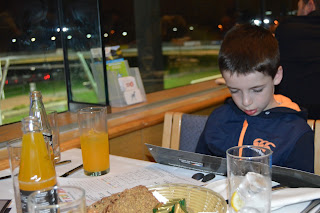 The squeals of excitement coming from the kids are something we'll never forget - they just got so into the race. Once the bell went to signal we were about to go - they pinned themselves to the windows screaming and shouting for whatever Dog we had picked - it was brilliant craic.
There were 11 races on the card - we stayed for 8 inside and then went outside to experience it from a different perspective as it was a mild evening.
For Race 9 we were track side and our dog started well which only increased the tempo of the shouting – from us and all around us – however it was not to be and “number 4” finished third!

Oh well – time to go and with some gentle persuasion we said goodbye to Harold's Cross Greyhound Stadium.

The boys were exhausted but genuinely enjoyed the night so much. It’s the morning after now and Andrew (10) just walked in and said “thank you for the best night ever” – high praise indeed!

Mid-Term Packages
There are a number of great packages available which offer great value, particularly for Halloween

€15 for 2 Adults & 2 Kids including admission, race programmes and Puppy Treats for the kids.

Availability:
Friday 28th October to Saturday 5th November inclusive in all IGB stadia (as listed above)
This package must be booked in advance and is not available to purchase on the night.

Huge thanks to Orla,Dawn, Claire,Darragh,Ross,Amar and Dervla for looking after us so well tonight and all the staff at Harold's Cross Greyhound Stadium for an amazing night out to remember!